There is kind of a disconnect in teaching economic growth. We spend a lot of time telling students about the Solow model and capital accumulation, but at the same time the general consensus among growth economists is that total factor productivity is more important to understanding levels of output per worker.

where I’ve put output per worker (

) and capital per worker (

) in logs. Logs keep countries with very small or very big values of capital per worker from being so influential, and in logs this regression will have an obvious interpretation for the coefficient

If I run this regression, I’ll get some estimated coefficient

) is explained by variation in log capital per worker (

). The R-squared is really what I want; it’s the answer the question “How important is capital in explaining differences in output per worker?”. The coefficient by itself doesn’t tell us that answer.

Now, there are some big problems with this regression. Most importantly, it is almost certainly the case that

, the residual. The residual captures things like technology levels, institutions, human capital, etc.. etc.. and capital per worker tends to be large when these things are “big”, meaning that they have a big positive effect on output per worker.

So that means we cannot trust our estimate

, and cannot trust our value of R-squared. It’s worth writing out what the “true” R-squared is if we in fact had the right estimate of

. I’ll pre-apologize for the fact that this involves a lot of steps, but I’m writing them all out so it is easier to follow. 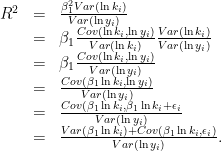 The last line is identical to what Pete Klenow and Andres Rodriguez-Clare (1997, and KRC hereafter) use to evaluate the importance of capital in explaining cross-country output per worker differences. In other words, KRC are just looking for an R-squared. But as they point out, they cannot simply run the regression I proposed above and get the R-squared from that, because almost certainly

Rather than run the regression, KRC suggest that we use some alternative means of estimating

. They propose using the share of total output that gets paid to capital. Why? Because under perfect competition and constant returns to scale, that share should be precisely equal to

. In data from the U.S., capital’s share of output is usually something between 0.3–0.4, and KRC use

) is exactly the same data that one would use to run the regression. The only thing they are doing differently is plugging in their outside estimate of

It’s interesting to consider, though, what could rescue capital as an important explanatory variable. KRC use the idea that capital’s share in output is equal to

is capital’s share in output (which KRC say is about 0.3) and

is the markup over marginal cost for firms.

. In particular, if there are increasing returns to scale at the firm level (i.e. fixed costs) but perfect competition (i.e. free entry/exit) then

still measures the payments to capital accurately, but

will be greater than one as firms with increasing returns need to charge more than marginal cost in order to cover the fixed costs.

, capital perfectly explains the varation in output per worker. Even with

, the R-squared is 0.67, meaning capital explains 2/3 of the variation in output per worker. So a relatively slight adjustment in the value of

changes the conclusion regarding capital’s importance for output levels.

The issues with this line of thinking are (1) if there are increasing returns to scale at the firm level, why don’t we see increasing returns to scale at the aggregate/country level? (2) even if capital explains most of the variation in output per worker, there isn’t any data showing that savings rates actually vary across countries meaningfully. The differences in capital are probably the result of different technologies/institutions, and so those are the more fundamental source of variation.

1 thought on “Is Capital Important?”